The ‘cheapest’ iPhone you can buy from Apple’s 2019 smartphone line-up costs $979. That’s nearly a thousand Canadian dollars for the smallest capacity iPhone before you even add in taxes. Choose an iPhone 11 Pro Max with 512GB of storage and you’ll be paying over $2000! At least you get one year of Apple TV+ subscription to soften the blow.

With every succeeding generation flagship smartphones from Apple, Samsung and OnePlus become more fragile too. The latest generation of phones uses glass on the front and the back, to enable wireless charging. And glass loves to break. No wonder more and more people are opting to repair and keep their phones for longer, rather than simply plump up cash for a new one.

Don’t take it for a swim! Indicators inside the phone turn pink when they detect moisture. Your phone may be advertised as ‘water resistant’, but you can lose your warranty if it gets even a little wet.

At ASK Computers we have repaired thousands of broken phones. Here are the top five reasons why people come to us for cell phone repair in Toronto.

Since phone accidents have become so common, people have had to find ingenious ways to save money on repairs. Here are 5 ways you can save $$$ on your next cell phone repair in downtown Toronto.

Not going to Apple – Apple’s prices for repairing broken screens and glass on the back can cross a massive $400! That’s for the ‘cheaper’ models which don’t have an OLED screen. Looks like the ‘Apple premium’ extends beyond just its products and into repairs too.

Replacing only what’s broken – One of the reasons why Apple repairs are so expensive is because they don’t repair, they replace. ‘Geniuses’ replace complete parts, rather than just repair the small broken component. Why? Because they can get away with it – but maybe not for long.

Authorized third-party repair – Unlike going to Apple repair, an authorized repair shop will simply replace the broken parts with genuine OEM replacements, rather than say ‘hey, we need to replace the phone’.

Is it illegal to get your iPhone repaired from a third-party repair shop?

No! That is a total myth. Smartphone owners spend hundreds of dollars more and days waiting for simple fixes that can be done in a jiffy. If you visit a reputed phone repair team like ASK Computers, you’ll receive the same genuine parts, exceptional quality repair work – at a fraction of the cost! 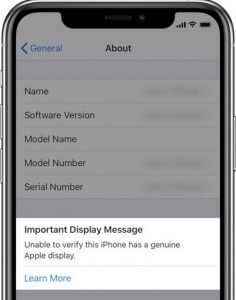 “I went to an Apple store for my cracked screen. They said it’ll take 2 weeks and I’d have to pay for shipping the phone too!”

“I gave my iPhone 8 to Apple for repairing and when it came back it had a sticker from some other company.”

“My battery stopped working and the Apple rep told me the motherboard was burnt. A third party repair person swapped batteries and it was fine!”

“I broke just the back of the phone and the rep said Apple MUST replace the back and the screen! Why?!!”

How much does it cost to repair an iPhone screen?

Here are Apple’s prices for their recent models:

The prices do not include taxes, the cost of sending the phone to Apple and Apple’s own separate shipping fee. If you have AppleCare+ and are within the two year warranty, the cost is $39 (taxes and shipping extra) (+$249 for the AppleCare+ plan).

Call ASK Computers and find out how much we can save you on your mobile phone repair in Toronto.

Think you are paying for an Apple Genius’s gentle hands repairing your phone? Wrong! Apple outsources a lot of its repairs to third parties.

How much does it cost to repair a broken charging port (lightning port)?

If you go to Apple for a simple broken charging port, expect to pay around $549 (plus taxes and shipping).

Need to get your repaired fast and for a fair price? Come to ASK Computers. We offer only quality parts that will make your phone look and feel exactly as it used to. Our phone specialists can repair a broken iPhone in no time at all. Want to find out how much your iPhone repair will cost? Just give us a call at +1 (416) 862 9595.

ASK Computers is located in the heart of downtown Toronto.